On the surface, Bitcoin transactions appear to be fast and easy – and they truly are. However, behind the scenes, the technology that makes the Bitcoin network run seamlessly is a massive ledger known as the blockchain.  It’s massive because it contains a record of all bitcoin transactions that have ever taken place since Bitcoin was first released in 2009.  As more time passes by and more transactions occur, the size of the blockchain will continue to grow.

So here is how the blockchain works: 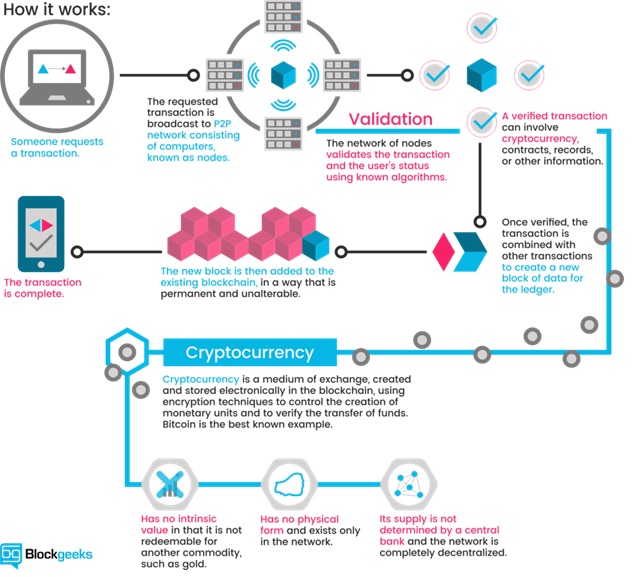 This entire process takes about 10-45 minutes from start to finish (this is why Bitcoin transactions don’t happen instantly). Once the transaction is finalized, no one can undo or delete the transaction. The person you’ve sent the bitcoin payment to (the receiver) will now see your payment in his wallet.

So who verifies and confirms transactions if there’s no central body governing the network?

The answer is the miners. The miners are literally the lifeblood of the entire bitcoin network. Some have even compared miners to being hamsters in the wheel that keep the entire Bitcoin network going! And this is true.  Miners play such a huge role in the success of Bitcoin that they truly deserve getting rewarded in precious bitcoins.  Without them, no new blocks would be created and added to the blockchain.  If nothing is added to the blockchain, no transactions are ever finalized. This means no bitcoins payments are sent and received by anyone on the network. No new bitcoins will be created.

Because miners are indispensable to the Bitcoin network, they are compensated for their hard work in terms of bitcoins (it would not make any sense to reward them in traditional paper currency). They are almost like employees of the network.  Since there are only a limited number of bitcoins (21 million), the number of bitcoins that miners are paid with will continue to dwindle until all bitcoins are exhausted by around 2140.

Now that you know what Bitcoin and cryptocurrency are all about, let’s go to the next guide where you will learn how the value of bitcoin is determined.