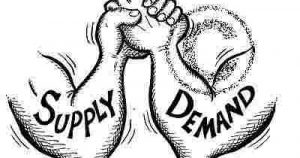 The market value of Bitcoin, ie, the money that people are willing to pay for it follows the same old basic demand and supply rule: a high demand increases its price and a low demand decreases it.

Before we go in any further, just remember that the value of something is not the same as its price; value is what people perceive a product is worth, while price is what they pay for it. Even so, value and price go hand in hand: the price of something is directly related to its value and vice versa.  According to an article in the Economist, the increasing trend in the price of Bitcoin is what drives people to invest in it.

People are investing because they believe that, following the trend so far, they would be able to sell their Bitcoins for a much higher price in the future—which the article argues is a perfect example of the greater-fool theory.  Basically, the greater-fool theory states that the price of a product is determined not by its intrinsic value, but by the beliefs and expectations that the consumers put on the product.  From this perspective, the surging price of Bitcoin serves not to increase its actual value, but to render it irrelevant.

The market is driving the price of Bitcoin up because of growing belief that it will be worth more in the future, not because they think its value is increasing over time. However, some people argue that the surge in Bitcoin prices that the past year has seen is not indicative of it being a bubble.  In the Bitcoin site itself, it argues that it is not a bubble, citing that bubbles are artificially overvaluations of a product which tends to correct itself eventually.  It cites its relatively small and young market as the reason for the volatility in Bitcoin prices—that “choices based on individual human action by hundreds of thousands of market participants is the cause for Bitcoin’s price to fluctuate as the market seeks price discovery.”

It argues that the volatility of Bitcoin prices are due to many forces such as:

As such, Bitcoin is arguing that its growing prices can be attributed to more and more people finding the product increasingly worth their money based on its utility, thereby validating its value.

So, in summary: Bitcoin’s utility and scarcity gives it value, but its prices seem to send opposing signals as to whether it’s truly valuable or not.

With more and more people beginning to show interest in Bitcoin, perhaps we are barely scratching the surface of what its true value may be.

So, the next question is ‘How do I get hold of Bitcoin?’